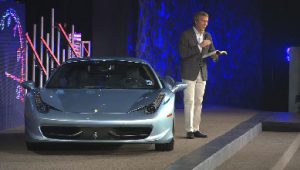 After causing a stir on Twitter for tweeting „Someone just gave me a brand new FERRARI!!!! (sic),” the Fellowship Church pastor literally drove one onto the church stage on Sunday.
But that wasn’t his car, according to his blog (a call to the church was not immediately returned). He was using it as part of a sermon illustration for his latest series titled „RPM: Relationships. Passion. Marriage.”
„God gave me a Ferrari because I am a Ferrari. You’re a Ferrari too. God has given you a Ferrari,” he said.
Weeks earlier, he was behind the wheel of a Rolls-Royce – which also was used as a prop – as he emerged on stage for his sermon.
The luxury car, considered a dream car among many, was also used as a way of telling the congregation that they are a Rolls-Royce because they are made in the image of God.
Citeşte tot articolul!